The text below is from the book Progressive Aikido, The Essential Elements, by Moriteru Ueshiba doshu. He is the grandson of the founder of aikido. Here is explained which aspects of aikido can be meaningful for you. Especially this diversity make is possible that aikido can meet the combination of your personal needs.

Aikido as a Martial Art

Aikido is a system derived from the martial traditions of Japan. Martial arts that have preserved their traditions intact, as handed down from the past, are known as kobudo. Aikido, however, is not one of those kobudo. The founder of aikido, Morihei Ueshiba, trained in many traditional martial art systems, and then developed aikido, an entirely new system. Morihei took the best aspects of the old systems and created a martial art for the future, a modern budo within the context of contemporary society.

Aikido as a Training Method

Since aikido does not have organised competitions, forging of the individual spirit is paramount. The Founder Morihei Ueshiba said: “Never cease forging your mind and body to refine your character though training — this is the spirit, seek out the best in the human spirit and train continually. This is the power of spiritual development.”

The purpose of aikido training is to harmonise oneself with nature, integrate body and mind, manifest one’s inner goodness, activate one’s spiritual power and rest in a secure, unshakable state of being.

Aikido is budo, not a system of self-defence per se and lacks any kind of organised competition. Human beings continually face dangers, however, and disasters can occur without warning. Aikido cannot protect us from unexpected dangers, but it does help us to develop presence of mind and teaches us how to move in the most efficient manner, which can work as self-defence agaist unforeseen attacks. In the case of female practitioners, in training they learn how to control a stronger force and move quickly and properly; skills that can be applied in a practical and efficient manner if the need should ever arise.

Furthermore, in the modern world, we face a variety of danger. Traffic, falling debris, earthquakes, fires and the like are also enemies. Aikido helps develop presence of mind — self-defence — against these threats as well.

All those who practise Aikido notice, sooner or later, that because the movements of aikido are based on natural principles, the balance between body and mind is naturally restored. In training, stress seems to disappear. Imperfections in one’s character get ironed out. One develops a brighter outlook, a more positive attitude. In other words, a character that is “flexible on the inside, hard as diamond on the inside.”

We often see people who behave aggressively or are ruled by their passions, but among aikido practitioners such people are rare. Aikido practitioners tend to be cheerful, not depressing, characters. They are not timid. In aikido techniques, we learn how to project the power of ki in body and mind and that helps dispel all inner stagnations.

In Aikido, all the movements practised are based on natural patterns. It is a balanced training method and thus naturally good for the health. In modern day life, total use of the body has been largely lost because of the reliance on machines and this has a direct bearing on our health. In Aikido, there are many full body movements; movements that naturally stretch the outer and inner muscles and joints and help keep us flexible. Aikido training also stimulates the nervous system, promoting good blood circulation. From the perspective of preventive medicine, this is the best kind of exercise.

Recently, it is not unusual to see children and parent training together in aikido. Aikido is good for everyone regardless of age and it is a valuable form of life-long education. Children, college students, adults — all ages benefit from the developing the character and integration of the body and mind. Children who start the martial art of aikido naturally settle down and learn good manners. In fundamental aikido movements one learns how to project ki and natural power — project it outward, not store it up inside. There is nothing forced in the natural movements of Aikido. Such training has a positive effect on one’s character, making it brighter and more direct. The physical techniques of aikido polish one’s mind and body.

Aikido is popular among young people. It is traditional budo, but free of sporting elements, and that makes it attractive to many active young people who wish to develop their persona — ki, mind, body and power — as one. Aikido also helps relieve some of the pressure and strain young people experience.

For adults, the emphasis is more on maintaining the harmony of body and mind, good health and spiritual refinement. In Aikido, we always try keep ourselves focused in our seika-tanden (the body’s psycho-physical centre about two inches below the navel) and move with ki, body and mind unified. With such a firm centre it is easy to move freely and flexible. Those who are naturally flexible on the outside yet strongly determined on the inside are respected by society. In Aikido, we have many practitioners of more advanced years. Since Aikido has many variations and techniques can be adapted to meet one’s physical needs, it helps keep your mind and body flexible. Even practitioners in their 80s can still conduct fulfilling and rewarding training in Aikido.

Aikido in the Context of Traditional Japanese Culture

After Japan’s defeat in World War II, much of Japan’s traditional culture was abandoned in the mad rush to develop into a world economic power. Nowadays, Japan is indeed an economic superpower, but upon reflection, much of our traditional spirit has been lost and we are poorer for it. today, many have forgotten the horrors of war and the hard work that went into Japan’s economic development. Now is the time to preserve the best elements of Japanese tradition.

In the past, Japanese people learned the values of venerable traditions, such as respect, trust, integrity and determination. Aikido emerged from the ancient martial arts of Japan, not as a mere hobby or pastime, but as a true manifestation of Japanese traditional culture. Aikido is not a martial art that focuses on defeating an opponent; Aikido, many feel, is a Way leading to the perfection of the human character. 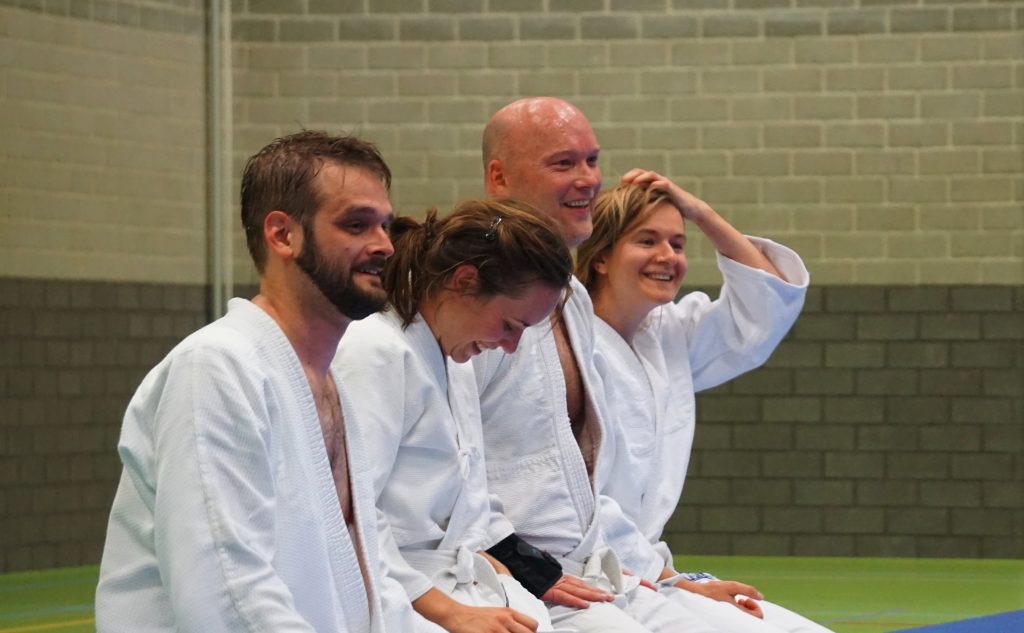 As we have discussed, there are no forced movements in aikido; everything is natural and harmonious. Aikido fosters good manners and integrity and helps one develop a flexible yet firm character. Since aikido enlightens those who honour peace, it is honoured by the word at large.

From the beginning, aikido never sanctioned organised competitions. It avoids all conflict and emphasises forging of body and mind. Within dedicated training, a spirit of harmony grows and genuine friendship is found; and within friendship, there is unity. In aikido, this is what creates lasting relationships.

Aikido is for everyone, in all parts of the globe. Aikido symbolises harmony, love and peace. Aikido is now practised in nearly every country in the world, brining people together — it is truly an international art.